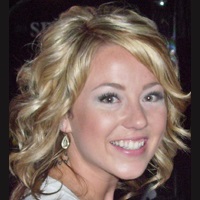 In early 2012, newly 25 years old, Littleton Colorado's Stephanie Madsen thought she had her entire future planned out. Just married, she wanted to move to a new city, buy a new house and start a family with her husband Matt. Life seemed to be perfect for Stephanie until one day her list of dreams quickly turned into a battle plan to fight cancer. "It was so tough, I felt like we had lost our freedom to plan our lives," says Stephanie.

"I can't imagine not having my faith in a situation like this."

Stephanie was diagnosed with large-cell neuroendocrine cancer of the cervix. "I had been trying to find out what was wrong with my body for almost a year and although I received bad news I was relieved to know what was finally wrong with me," she explains. Not only would Stephanie have to endure a very long and aggressive chemotherapy/radiation treatment but she would also have to have a hysterectomy. "Hearing I had cancer was tough but hearing that I was going to have a hysterectomy at twenty-five was even tougher," she explains. "We hope surrogacy can be an option for us one day but we've talked about adoption before and now that it's a choice we might have to make, we've accepted it," she says.

One wouldn't expect to be embraced by smiles, hugs or laughs when speaking with Stephanie but she says her faith is what keeps her going. "I can't imagine not having my faith in a situation like this. God is my rock and I know when I'm weak, he'll be my strength. I just had to take my diagnosis and turn it into something positive. I thought ok, my sole purpose right now is to fight this cancer and be as strong of a solider as I can be. I'm a Christian and God will get me through this!" 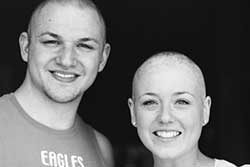 Stephanie underwent both chemotherapy and radiation treatments at Rocky Mountain Gynecologic Oncology at Swedish Medical Center. "I love it here. The nurses and doctors really get to know you and develop a true friendship with you. For me during this experience to come into treatment and know who you’re going to be seeing and know that they truly care is so comforting," says Stephanie.

"Our patients are like family to us. We want every patient to feel as comfortable as possible as they go through treatment. It’s our duty to make sure that happens," explains Dr. Mary Jo Schmitz.

Throughout the course of her treatment, Stephanie found an outlet by blogging at Derailing My Diagnosis; her way to inspire others battling cancer. "Cancer for me was really taboo. I never knew the details of it. I wanted people to lose the taboo with cancer so my blog is a way to open that door. I like to write about things like losing my hair! I was a hairstylist and I knew I was going to lose my hair so I shaved it off before it could fall out. It was so liberating and helped me take back control of this cancer," says Stephanie.

Only One Cycle Left! 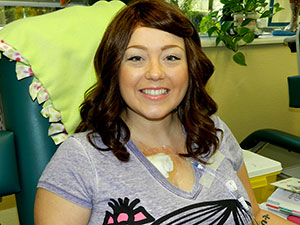 Stephanie couldn't be more excited because she's only one cycle away from being done with her cancer treatments! "The biggest thing I've learned through my journey of battling cancer is how strong and courageous I really am," says Stephanie. Stephanie, 25, was put on a very aggressive six month radiation and chemo treatment for cervical cancer. She says it's been a long journey with ups and downs but her faith keeps her positive and she is looking forward to what's ahead once she "kicks cancer in the butt!" 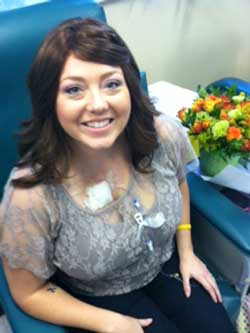 Today is Stephanie's last day of treatment! After six long months of chemotherapy, radiation and surgery, Stephanie is celebrating the end of her long journey. "Today is exciting but I know that I need to continue to keep my mind and faith strong because the battle doesn't end here, it doesn't end until I'm fully in remission," says Stephanie.

After today Stephanie and her husband Matt plan on taking a trip to celebrate! "I want to do something fun, we were going to go to Hawaii but I think we might go to Disneyland!" Stephanie says the biggest thing she will take from this journey is learning just how strong she really is and understanding that you never know what people are going through in their lives. "You never know if the person sitting next to you might have cancer or might be battling an illness. It makes me more aware of others," she explains. Her piece of advice for those still in treatment, "gut it out, there will be days that are tough but keep a positive attitude and don't let every day be a bad day, the end is near!"

In 2014, Stephanie and her husband Matt discovered the treatments had left them unable to conceive, so they made the decision to consider adoption. In the midst of planning, Stephanie started having pain in her stomach. "I felt this hard lump on my left side," she explains, "I knew something wasn’t right and I was praying my cancer wasn't back." Next she would receive news she'd hoped not to hear, doctors found a massive tumor the size of a soft-ball. Not only was her cancer back, she would need emergency surgery to remove it. "I took it a lot harder than the first time," says Stephanie, "this time I knew what it was and I knew it wasn’t going away."

Dr. Mary Jo Schmitz, who has seen Stephanie through her battle, performed her surgery. Stephanie says overall the surgery went well and the good news was the tumor hadn’t attached to any other organ and it was successfully removed from her body. "I was in the best hands and I had complete confidence in my doctor," she explains.

Since surgery, Stephanie has been put back on a treatment plan. She will have chemotherapy once a week for six weeks. "It's a constant battle, but I’m confident that I will be cured again. I believe my story can help a lot of people, I truly believe I wouldn’t be able to fully understand cancer if I didn't have this recurrence. I'm a fighter and I'm not giving up."

Stay Up to Date with Stephanie on Her Blog